Published May 26th, 2017 by Websiteadmin 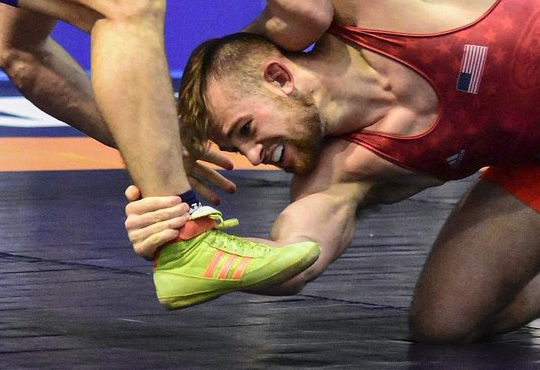 Great training is often about the team around you.

The leap from having a team to creating a team

When I look back at my collegiate wrestling career, I realize I was recruited into a room full of incredible wrestlers and world class coaches. The facilities were amazing and the daily competition helped bring out the best in me.

As I transitioned to international wrestling I had to create my own team which is easier said than done. I was lucky to have Nittany Lion Wrestling Club Resident Athlete Program available to me. The NLWC provides access to great coaches; Cael and Cody Sanderson, Casey Cunningham, and other incredible athletes. Kendra, my wife and nutrition enforcer, and I made the decision to make our lives in State College and started building our team around this home base.

My first few years on the international scene were decent, but I wasn’t where I wanted to nor needed to be. I had a few good wins, but I wasn't able to string together the training or the results needed to be the best in the world. In past interviews I’ve talked about the struggles I had making 74kg and one point I considered retiring from wrestling. Thanks to an introduction by Coach Casey I added a new team member, which as a result helped restart my career.

In July of 2015, after my last international tour at 74kg, I decided that I would move up to 86kg. I was scheduled to wrestle in Spain, and then Armenia. This tour was shortly after a frustrating 3rd place finish at the 2015 World Team Trials. I was sitting on the plane about to depart for Spain when I had decided I was no longer going to make the grueling weight cut to 74kg, and I was going to make the 26 lb weight class jump to 86kg. When I returned stateside, I spoke with each one of my team members (coaches) about my decision and Coach Casey suggested I work with Coach (and highly regarded mathematician) Sam Calavitta, Owner and Director of Operations at The Treigning Lab. Coach Casey had worked with Coach Cal extensively and believed he could help me not only transition to the new weight, but thrive in it.

The best way to describe Coach Cal is... he’s the math teacher that can teach anyone and everyone loves him even if they’ve never taken one of his classes. He’s an accomplished wrestler, martial artist, and triathlete finishing 9 Ironman’s.

And he’s a genius when it comes to getting the most out of an athlete’s performance.

A couple of days in Cal’s lab

Last weekend, May 19th - May 21st, I flew to California to spend time with Coach Cal and work with some other athletes.

These weren’t just any athletes. It was TJ Dillashaw, Aaron Pico, and Juan Archuleta. TJ is a former UFC Bantamweight champion, and is scheduled for another title fight this summer. Many of us are familiar with Aaron as a wrestler, but he is poised to be the next MMA superstar! His first Bellator fight is scheduled June 24th in Madison Square Garden. Juan has been working with coach Cal the longest, has an MMA career record of 14-1 and holds 3 belts at 3 different weight classes. Bottom line, everyone is a freakin stud!

Coach Cal dialed up the tests and each of us did what we could to outdo each other. It was like three brothers trying to get their favorite uncle’s attention. Instead of silly tricks we punished ourselves as we did what Coach Cal instructed from running on a treadmill, to cycling, to sled pushes and pulls, to lifting, to eventually jumping in the pool and swimming.

Even though we were doing the same regimen, Coach Cal knows what he expects from us individually and which buttons to push to get the most out of us today, tomorrow, and in the future.

Those were some of the most punishing workouts I’ve done in a long time. They are much easier to do when you have like minded people around you. TJ, Juan, and Aaron are some of the nicest, hardest working people I’ve met on my journey. You get the sense that they use their past accomplishments as a reminder of what they can achieve and they use what they will accomplish as the motivation to put the work in every day.

A break in the weather

The weather in California was incredible. The break was when we left Cal’s Lab to go train at RVCA’s headquarters in Costa Mesa. It is an amazing facility with everything we needed. TJ, Aaron, and Juan worked on the striking and other MMA aspects while I and Coach Casey got some good wrestling in. It is a beautiful facility and hope to get back again soon.

During our “break” we also got to meet some cool companies while we were out and about. Virus Apparel and Purps drinks. Some great people with a focus on healthy, active lifestyles.

It’s pretty funny to think that the easiest part of the weekend workouts was wrestling.

You hear it all the time and I am living proof... There is no shortcut, it takes time and dedication and in fact for a while you may feel like you’re not improving at all. It took 18 months for me to experience the changes that Coach Cal helped create and every month I feel like I make more improvements.

I learned an important lesson, when you choose your team, you have to trust your team and the process. Most importantly, you have to do the work. In high school and college, I had someone watching over me making sure I did what was necessary, the structure was already set. As an international competitor the structure is suggested, I have to commit to the structure and self motivate to achieve my goals. If I don’t, there are a line of guys ready and willing to take my spot.

For the young athletes and competitors here’s some advice.

It’s not always enjoyable, but it’s always worth it.

I’ve experienced first hand that some of the busiest people in the world will offer to help and make time for you if you show that you will put in the effort. You may not always win, but you will always end up better than you were yesterday.