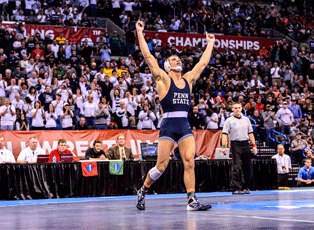 For only the third time in the 20-year history of the Dan Hodge Trophy, college wrestling's top award will go to same individual more than once in a career. Taylor dominated the official ballots in the same way he did opponents on the mat, winning 38 of the 43 official votes from the Hodge Trophy Voting Committee.

Taylor joins his coach and three-time winner Cael Sanderson (2000-2002) and Missouri's Ben Askren (2006-07) as the only multiple-time winners in the two-decade history of the award, given annually to the most dominant college wrestler. He also won the Hodge in 2012.

The award, named after Oklahoma's three-time (1955-57) NCAA champion Dan Hodge, will be presented to Taylor at the team's banquet on Saturday, April 26.

Another finalist was Oklahoma State's two-time champ Chris Perry (174), who defeated former NCAA champ Andrew Howe of Oklahoma two times in the last month of the season for the title in what many thought was the toughest weight class.

The fifth finalist for this year's Hodge was Oklahoma State sophomore Alex Dieringer who won his first national title at 157. Dieringer's only loss on the year was a January dual-meet loss to 2013 champion Derek St. John of Iowa, 2-1. Dieringer ended up fifth in the final Hodge point standings. For the year, he had 12 pins, 5 technical falls and two majors.

But when the dust settled on a wild year of college wrestling -- in which Stieber, Ruth and Perry all suffered one loss -- the undefeated Taylor (34-0) was the only one left standing with a resume of dominance.

Taylor's senior-season numbers were outstanding. The Nittany Lion, who with teammate Ed Ruth helped lead their team to a fourth straight NCAA title, had only two of 34 matches end without seeing him win bonus points. Taylor pinned 16 opponents, put up eight technical falls and had eight major decisions. Only NCAA runner-up Tyler Caldwell of Oklahoma State kept a match within seven points of Taylor, once in February (5-2) in the teams' dual in State College and in the NCAA finals (6-0).

Taylor said his goal in college was the same as it always has been in his storied youth and high school career: domination.

"If I had to pick what people remembered of me, it's that every time I stepped on the mat I tried to dominate the guys I wrestled," said the former four-time Ohio state champ from St. Paris Graham High School who added weight to his frame -- growing from a 135-pound prep senior to a 165-pound college senior in five years -- and points to his attacks . "I think Ed Ruth and myself we were the start of that change in the guard in wrestling," Taylor said. "We started to change the sport, to go out and score points. I don't want to be remembered as the guy who won twice or lost twice (in the NCAA finals in 2011 and `13), but as one of the most dominating wrestlers in the history of college wrestling."

"The way you compete is bigger than if you won or lost," Sanderson said. "This kid has a passion for wrestling and was an entertainer and was trying to score points the whole seven minutes.

"He wouldn't be a two-time Hodge winner if he didn't wrestle to dominate. And you wouldn't have that amount of success unless you competed the way David did and that was fearlessly."

Mike Chapman, founder of the Hodge Trophy, agreed. "For pure wrestling talent, I have seen only five or six wrestlers over the past 50 years who could match David Taylor," Chapman said. "He was a constant-motion machine and wrestled with an enthusiasm that delighted fans of not only Penn State but from other colleges, as well.

"If everyone competed like David Taylor, wrestling would be one of the most popular sports in America. His graduation leaves a big hole on the college scene but we can all look forward to seeing him turn his vast talents to freestyle."

Coming into the 2013-2014 season, it appeared it could be one of the tightest Hodge races in history with Stieber putting together an extremely dominating sophomore campaign. The only wrestler who kept the Buckeye from scoring bonus points was Penn State's Zain Retherford. Stieber, whose only loss came to the Nittany Lion in December, won by a pair of decisions in the Big Ten and NCAA tournaments.

Similarly, Ruth's junior season last year was worthy of a Hodge Trophy too if it hadn't happened during Cornell senior Kyle Dake's historic season which ended with the 2013 Hodge Trophy. Ruth was 34-1 this winter with 11 pins and nine technical falls as he won his third straight NCAA title himself. His only loss came against Cornell's Gabe Dean in the Southern Scuffle finals. Ruth avenged that loss to Dean in the NCAA semifinals.

Like many great athletes, Taylor made putting on offensive exhibitions and getting pins look so effortless, some in the wrestling community simply came to expect it. Sanderson, also known for his dominance in winning four titles and going undefeated at Iowa State, said he's going to miss his team leader because of that very perspective on competing.

"We're going miss him as a program and miss having him compete in Rec Hall, and fans are going to miss him. But it's about appreciating the time you had with him," Sanderson said.

"I really appreciate all the support I've had in my career," Taylor said. "Sometimes it was difficult always having the target on your back, but it drove me to do what I did. After I won my fourth Big Ten title, everyone got up and applauded, including the Iowa fans. That meant a lot to me, and I just want to thank everybody. I just appreciate all the support I've been given over the years."