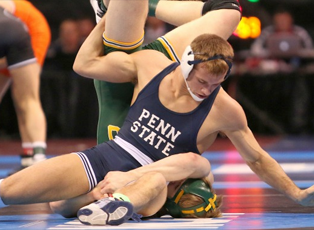 Less than one week after completing his college career by winning the 165-pound title at the 2014 NCAAs, Penn State's David Taylor has been named 2014 InterMat Wrestler of the Year, the amateur wrestling website announced on Friday.

This award, presented each year since 2006 to the best college wrestler in all divisions, is based on the balloting of writers and executives at InterMatWrestle.com.

Taylor was the unanimous choice of InterMat voters, receiving all 10 first-place ballots for a total of 90 votes. Ohio State's Logan Stieber -- 2014 NCAA 141-pound champ -- placed second in the balloting, with 48 points. Just one point behind the Buckeye was Taylor's teammate Ed Ruth -- 2014 NCAA 184-pound champ, and 2012 InterMat Wrestler of the Year -- with 47 votes. Oklahoma State's Chris Perry -- who successfully defended his 174-pound title -- placed fourth overall in the voting, with 29 votes.

Known by his Twitter name @magicman_psu, Taylor has achieved on-the-mat greatness throughout his high school and college career. Taylor was a four-time Ohio state champ at St. Paris Graham High who then headed east to Penn State, where he crafted one of the all-time great records in more than a century of Nittany Lion wrestling. In his senior season, Taylor compiled a flawless 34-0 record, with 16 pins, eight technical falls, and eight major-decision victories. He concluded his final year as a Nittany Lion by winning his fourth Big Ten title, and his second NCAA title, shutting out Oklahoma State's Tyler Caldwell to win the 165 crown at the 2014 NCAAs to go with his championship won in 2012. In addition, Taylor was named the tournament's Outstanding Wrestler, along with Most Dominant Wrestler honors for the 2014 season. Taylor concluded his Penn State career with a 134-3 record, putting bonus points on the board in 125 of those wins.

InterMat Wrestler of the Year Winners

"There is an argument that no wrestler has done more for a program than what David Taylor has done for Penn State," said InterMat senior writer T.R. Foley. "Ed Ruth has won more titles and Cael Sanderson is a once-in-a-cosmos talent, but at the crux of it all has been 'The Magic Man.' He's dealt with the pressures of collegiate stardom with grace, confidence and a genuine appreciation for the sport.

"There are times he's fallen short and times he's triumphed, but through it all Taylor has maintained a positive approach to the sport he cherishes. No, this isn't a lifetime achievement award, but it needs to be written. As a fan, as a member of the wrestling community: Thank you, David Taylor. It's been a blast watching you wrestle, and best of luck at the next level."

In the coming days, InterMat will also announce its Freshman of the Year and Coach of the Year honorees.